Have u seen this movie before ?, I hope u r that lucky to enjoy two hours of  emotion-moving  and exciting questions about life.
Its another magnificent movie of Robbin Williams , one of the actors that his name on a movie really means that u gonna enjoy something and learn many things watching that picture.
The movie is about a robot which his system developed a sudden new kind of interaction with his surroundings.
His owner believed he must encourage this interactive part and learn him so much about life, eventually as the time goes and he learns so much he wants to be human being as he is everything like them.

I think the greatness about that movie is it didn't just represented the questions about robots as other sci-fi movies did ,it gave u meanings about life itself , being alive no matter what u look like , the dialogue from the movie in many scenes is all about living life.
For example as a funny scene when the robot loses his rubber face to get a skin one instead he screams and says that it because "He said his inner side" i think its great gesture about our conscious not our look. 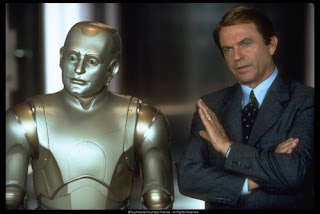 In another scene he asks "is it true that no one gets everything cuz some people do and gives me great confusion?"
its about life in general not just being a robot.
I really think its a very enlightening movie in a funny emotional way.
Here r some of my best quotes of the movie:-
About freedom:
"One has studied your history. Terrible wars have been fought where millions have died for one idea, freedom. And it seems that something that means so much to so many people would be worth having."
About the experience of intimacy:
"That you can lose yourself. Everything. All boundaries. All time. That two bodies can become so mixed up, that you don't know who's who or what's what. And just when the sweet confusion is so intense you think you're gonna die... you kind of do. Leaving you alone in your separate body, but the one you love is still there. That's a miracle. You can go to heaven and come back alive. You can go back anytime you want with the one you love."
About the being:
" I try to make sense of things. Which is why, I guess, I believe in destiny. There must be a reason that I am as I am. There must be."
" To be acknowledged for who and what I am, no more, no less. Not for acclaim, not for approval, but, the simple truth of that recognition. This has been the elemental drive of my existence, and it must be achieved, if I am to live or die with dignity."
" I think personality is much more important than intelligence"
In the end , I hope u watch this good movie and enjoy itand i m quoting" As the great Andrew Martin once said "One is glad to be of service"
Movies i liked

October 28, 2009
Do you know about tears ? the most pure thing in the world nowdays , i experience a very new kind of tears Usually , it was for sadness depression or being touched by some situation but now theres a brand new tears i have THe tears of LOVE It s a very sweet tears that i almost get addicted to it and for the poor ones didnt get to know it i ll describe it for u...... They r small pure drops of tears unexpectedly , u find in ur eyes when u talk to the one u love think of him or see him Tears , u feel that ur heart cried them not ur eyes cried them of joy u feel that his shaking.. got his essence out of him Tears when they fall on ur cheeks u fell warm easy and above all safe and thrilled Tears when they touch ur face its like the drops of dew at the early dawn when they wash the face of earth in a sweet tenderness Tears when u see in the eyes of the one u love every little thing of u compete to have the hounor of clearing them away when they fa
Read more

March 16, 2010
I have been fired, for the first time on my life , Ive been fired, it wasn't an official work , but it was some kind of work and my director fired me . Its a brand new experience for me actually to get fired, God its so humiliating feeling to get fired , it makes u feel worse than useless, it makes u feel that u r nothing but trouble to the people around u. The funniest part about that experience that i actually kinda liked the way i got fired, u know , my director was so god damn professional in firing me , i swear to god i m not kidding, he has a very professional official way in firing me, despite being a colleague of mine in the real life , when he was firing me he actually said sir or "حضرتك" His words were so reasonable and finely arranged, he said a reason after another, defended the institution he represents which he thinks i made some kind of trouble in it and then after "I" asked about his final decision he told me that i m fired ,God it was perfec
Read more